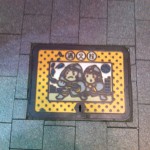 Ok, so this is kinda related, right? Japan is high-techy.

So for those of you that aren’t aware, I recently had the opportunity to travel to Tokyo, Japan. As I keep getting asked, “How was it?” I figured that I might as well blog about it in the hopes that it might save me one or two retellings. (It probably won’t)

So the reason for my trip to Japan was to appear on a Japanese television show, “Okamura Japanese Tourist.” The show was hosted by Takashi Okamura, a very famous Japanese comedian. I didn’t realize how famous until I got to Japan. I don’t want to spend to much time on the how and why of it, but essentially I was forwarded an email by a friend regarding an opportunity to appear on this program last December. I submitted myself for it, along with a questionnaire and a short video. About 4 weeks ago, I was contacted and informed that I had been selected to go to Japan. About 10 days notice, I think.

We’ll also skip all the hoops I had to jump through to facilitate my exit from this country…on Tuesday, January 28th at about 11:00PM I arrived in Japan at Haneda airport. A couple of representatives from the television agency were there to pick me up, and promptly carried me to my hotel. I was given ample time to practice my Japanese on the taxi ride over, as I think my Japanese was better than their English. 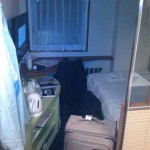 After checking in to my hotel in Tokyo, I finally got the key to my  room. Seriously, this room was small. It doesn’t help that I’m 6’6″ either. My immediate though when entering was, “Where is the rest of it?” A bit of a shock, honestly. Though this was my first visit to Japan, I’d like to think I am not unfamiliar with Japanese culture. As I found out many times during this trip, there is a big difference between reading about a place and actually being there. Also, I don’t think there is another city in the world like Tokyo, so I had to keep that in mind as well.

One more bit about the hotel room. the toilet was freaking awesome. Heated seat, water that shot up(at 3 different settings!) and…well you get the idea. If you don’t, go google Japanese toilets. It was awesome. probably the thing I miss most about the country. Seriously, when I make my first million, I’m getting one of those suckers imported. The shower was pretty cool as well, other than the fact that I had to squat a bit in the shower because I was taller than the spigot. Heck, sometimes I have to do that here in America! So, I wasn’t really upset about that. The room was small but the toilet more than made up for it.

I pretty much slept till about 1 the next day(Wednesday). I did wake up for breakfast(and go immediately back to sleep after). Nothing too out of the ordinary, at least by Japanese standards I think. Scrambled eggs, rice, sausages, miso soup, fish, croissants. Meeting with the TV producers at 5, so I figured I’d take a little walk. My hotel was in a district of Tokyo called Akasaka. From what I could tell, it looked like a good mix of business and residential. I don’t have much to say about the walk. Saw my first konbini. For the unschooled, konbini are Japanese convenience stores. Somewhat similar to what we have here, though konbini are quite a bit more expansive. They sell food, and that food is cheap and GOOD! I primarily ate at konbini while in Japan. I was on a tight budget, but I do not regret the decision. If you should go to Japan, and find yourself in a konbini, get the chicken. You will not be dissapointed!

We met with the producers at 5, inside of the broadcasting station headquarters that was literally right across the street from my hotel. I say “we” because I was not the only person selected for the show. There was an Italian young woman and man, a German guy, and my American self. Ages spanned from early to late 20’s, four of us total. A funny thing I’ve come to notice is that I always feel more American when I travel outside of the country.  Maybe It’s that national pride kicking in or something.

I think the entire experience didn’t become real to me until we entered that TV station. The TV station was grand, very large lobby. As cramped as everything else in Tokyo was, I noticed that the office buildings were impressively spacious. Maybe some cultural aspect there I don’t fully understand. The last thing of note about the lobby was the reception desk, where about 6 Japanese female receptionists sat. All very pretty of course. I don’t know why that struck me so, I suppose it seemed so stereotypically Japanese it hurt. The perfect immaculate facade presented. I knew enough about Japanese culture to expect it, but I suppose it actual practice you expect there to be a little deviation from the supposed ideal. In Japan this is not the case. It appeared to me that presentation is of the utmost importance, a theme I saw repeated during my trip.

The meeting with the producers was interesting. After passing through that lobby, signing in, getting out visitor badges, I finally started to get nervous. “I’m actually in Japan. This is a real thing that’s happening. Holy s***!”  The staff was awesome though. The meeting was pretty much an check-in and overview. They had asked us to bring a couple of things, Tokyo travel guide, souvenir for Okamura-san, a couple of other things. Earlier I had asked for wrapping paper for my souvenir, as I remembered that wrapping of presents was pretty important in Japanese culture, and I wanted to be mindful of that as best I could. In retrospect I don’t think it mattered that much, but I got wrapping paper and a set of scissors out of the deal. The producer also asked questions about us, why we were interested in Japanese, how long we had been studying, what we liked about Japanese culture, and so on. At this point please note, unless I’ve said otherwise these conversations are happening in Japanese, so that adds another layer of stress to the exchange. Granted, we had an interpreter, but he let us try our own hand as best we could. My Japanese still has a ways to go, but I did okay.

After the meeting, they bought us dinner. I believe this was to make us sleepy so we wouldn’t go out that night and possibly be tired for shooting the next day. I impressed them with my beer-quaffing skills, but that’s a story for another time… After the dinner the four of us foreigners walked around Akasaka for a bit, but it was pretty much dead after 9. I later found out that Roppongi or Ginza was the place to be late at night, but I don’t want to get ahead of myself… 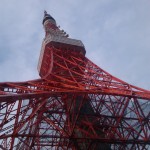 Thursday, the day of filming. They herded us into a van at about 6 in the morning and carted us off to an undisclosed location. All of the film crew was pretty mum about what we were going to do that day, as they wanted to preserve the surprise for us. We stayed in the van for awhile, about 30-45 minutes or so. It took us about 20 minutes to look out the window and realize we were at the base of Tokyo Tower. *facepalm* A little after sunrise, we got were mic-ed up and hung out in front of the tower to await Okamura-san. We, of course decided to pass the time taking ridiculous pictures. Please note, anything I describe after this point was most likely caught on film, as they filmed EVERYTHING.

Okamura-san comes up with a little bit of fanfare, introduces himself, and then has us introduce ourselves and do the embarrassing thing we did for our submittal video. For the sake of my pride, I will not share what I did for mine, so if you want to know, you’ll have to find the show in Japanese. Good luck. After introductions were out of the way, we then hopped into a car(complete with video cameras) that Okamura-san drove to our next destination. The production car drove in front of us, giving Okamura-san cues and directing some of the banter on the way to our destination. 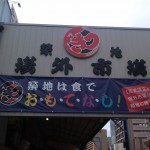 The first stop was at some sort of market. Honestly, I still don’t know where we were. I should probably research that. As we made our way through this market, I began to realize how famous Okamura-san was. I could hear people saying(translated from Japanese obviously), “Wow is that Okamura-san?” “That’s Okamura-san, wow!” Stuff like that. And then there were the schoolchildren. Once one kid saw him, told his bud, next thing we know we have 50 Japanese kids following us. I think that it is a custom with shows like this for the host to carry a small flag with the name of the program on it. One kid got a little too close and Okamura-san swatted at him with the flag. Hilarious. 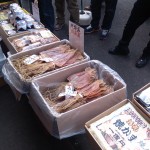 As this was a market, there were all sorts of food about. I had made up my mind as this was a once-in-a-lifetime experience I was going to roll with whatever they threw as best I could. So yes, I ate a lot of weird things. Most, I don’t even know what they were, and I think that’s for the better. Umeboshi, dried squid, some type of scrambled egg thing, raw oyster, I went along with at best I could. Most to the chagrin of my tummy. Finally we reached our destination! A restaurant, that served sushi among other things, from what I could tell. 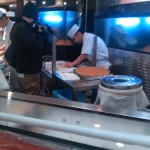 So the first thing I noticed about this restaurant that there were two very large fish tanks behind the counter. We were seated, then Okamura-san said something I didn’t understand to the person behind the counter. What happened next was the first of many shocks of the day. Said individual then proceeds to grab a net, pull a fish out, gut it, slice him up, and put him on a plate. All directly in our view. So now I have a fish in front of me, that less than 2 minutes ago was swimming minding his business. A little too fresh for me. Mind you, this fish was so fresh that his severed head was still breathing. At this point I lost it. I am freaking out. I was told I squealed. I don’t think so, but if I did, I’m sure it will make the final cut of the show. 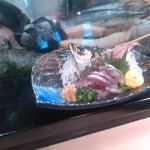 I actually did eat the fish, and truthfully it wasn’t that bad. That said, I don’t think I’ll be ordering it on subsequent trips to Japan. Compared to the lead-off, the rest of the meal was pretty pedestrian. A few pieces of sushi and some natto. Natto, for the unschooled, is made from fermented soybeans, and are quite popular with some Japanese. It also smells horrible. Natto was one of those things that I wanted to eat once just to try it and experience it. I will not be eating it again.