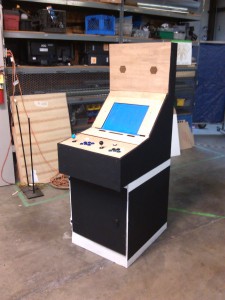 So a couple of days ago, Good Day Sacramento came down to Hacker Lab to check out the latest iteration of my arcade machine. Admittedly, I didn’t finish the thing until about an hour before they came through the door…but why quibble over the details?

I have to say, it is a huge catharsis to get this thing built and up and running. Also I suppose I should thank the folks over at Good Day Sacramento for taking the time to come by, and thinking enough to feature it. (I should also thank them for indirectly lighting a fire under my bottom to get it done…) I have literally been wanting to get this built for YEARS. And yes, I got the Mk. II up and going awhile ago, but this one more accurately looks like an arcade machine. The other one was nonetheless cool, regardless.

As far as the frame itself, it’s mainly supported by 2x4s with chip board on the outside painted with chalk paint. I’m thinking that as I change the game running on the machine I can write on the outside what’s currently on it. Or maybe encourage people to write notes on the machine. It just seemed like a cool thing to do, and anytime I can use chalkboard paint, I’ll go for it. The joysticks and buttons were ordered online. The joystick panel, and speaker/head panel we’re cut on the laser cutter. On the previous iteration, I cut it with woodworking tools, and hand drilled the holes. This way was MUCH easier.

Inside of this beast, it’s just a normal desktop computer running it. Pretty similar in operation to the last one, just a bit prettier. I wanted to make sure this one was 2 player, so one side has the keyboard hack wired to the buttons directly, and the other side has an computer controller wired directly to the buttons. Had to do a little more precision soldering than I’m used to. But, as with every iteration so far, I’ve learned so much building this thing, and I have more than a couple improvements in mind. But for now, this is one metaphorical monkey off my back! 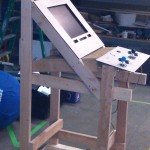 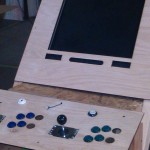 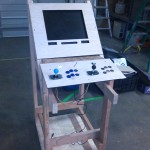 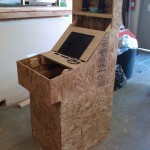 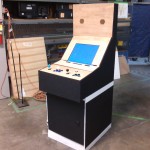 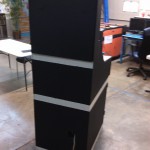