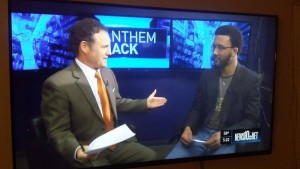 Last week I was on KXTV 10 Sacramento, the local ABC affiliate station, to answer questions related to the recent Anthem/Blue Cross/Blue Shield hack. The data breach has been in the news as of late, you may have heard something about it. Actually, this is the third time I’ve been on ABC 10 in about the last half year. I wonder if I’m quickly becoming their resource to talk about computer-y stuff. Which I am totally okay with, by the way. (Also, big thanks to Walt Gray for inviting me down to talk for a bit.)

It’s a bit funny because most of my Hacker Lab compatriots respond to this sort of thing with a vehement “No way!” or “They don’t want me on TV…” or more responses of that nature. I suppose that lines up with the stereotypical “hacker” disposition: distrustful of authority, avoidance of the population at large, and other such behavior. Now when I say stereotypical, I mean exactly and just that. If you come down to Hacker Lab, you will find, by and large that we are respectful, welcoming, engaging, and more than willing to help. I’ve been told multiple times that the Hacker Lab building from the outside, gives off a vibe that screams, “If you don’t have business here, you should just move on…” What I’ve also been often told is that this vibe is usually quickly dismissed once you come inside. That is one of the main reasons I’ve stuck around for so long.

Going back to this “cyber expert” thing. Truthfully, that makes me a little uncomfortable. Mainly because I know actual cyber security experts and my knowledge doesn’t hold a candle to theirs. That said, I suppose I probably know a bit more about cyber security than the average person, so we’ll call that a push and move on. Anyway, as “experts”, I feel we have to work harder to interact and discuss with the community. As techies, we (stereotypically) shy away from interaction with the public at large because of social anxiety or annoyance. This creates a gap of knowledge that leads to a whole host of issues, because the people that have the information aren’t sharing it with the people that need to hear it. Of course, the people that need to hear it usually don’t want to because it’s boring and they’re otherwise not interested. I can’t tell how many times my friends/family/significant others’ eyes have glassed over when I go into full nerd mode. (At this point in my life, I try REALLY hard to tamp that down, but there are slip-ups…)

Now I could chide the listener, and I sometimes do, but I always have to turn the situation back onto myself and ask what can I do differently. Especially in academic contexts, the “rightness” or importance of what we are discussing is usually carries enough value in our minds, to make it worth someone else’s time. Often times, this sentiment is not shared by the listener, hence the glassy eyes. Again, I could blame the listener, this is important stuff, they should pay attention, and the importance should be enough. But it is often not. However, all of this information I knew before I started the conversation. So if know the mindset of my audience, know how they generally respond to this type of information, can I really be surprised at the outcome if I approach instruction from that angle? If anything I need to chide myself for expecting anything different. Should I have to chide myself and alter my message? No. Buuut, if I want to communicate with my audience, I have to start with where they are, not where I’d like them to be.

It is from this place that I try to teach. Life is all about the perspective through which you view it, and I’ve always been about dealing with the world that is, not the world I want. Your “students” usually aren’t going to come in with an appreciation for your subject matter, or at least not a proper one. In framing a message, I believe the most important thing is to frame it in a way that is relatable/digestible to your audience. You’ll have to wait a bit to drop the main idea. Got to keep them awake first.