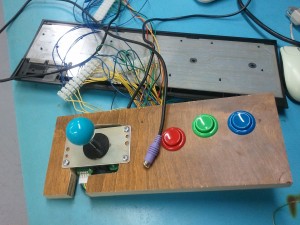 This is a picture of an arcade joystick keyboard hack I’ve been working on. Yes, it looks terrible, but I’m proud of it on multiple levels. The way it works is, you take apart a keyboard, solder connections from the control circuit card to the joystick and button inputs…and voila! Arcade joystick. But the real story here is not the ins and outs of this poorly constructed hack, but more so what it represents.

Anyone who knows me knows I am a HUGE gamer. Nintendo, Sega, PlayStation, I’m into it all. People who know me a little better, know I’ve been wanting to build an arcade cabinet for a while. I had drawn up some plans, thought about it, but it never went anywhere, until I finally got the catalyst to kick it off.

A month or so ago, I’m sitting around Hacker Lab and the subject of joysticks and arcades comes up. Josh Smith comes up and suggests the idea of building arcade machines. I’ll take care of the hardware, he’ll handle the software. This was music to my ears as I now had a partner and didn’t have to shoulder the load on my own.

I think that a lot of tinkerers, hackers, hobbyists are in their own homes, their own little islands, looking at cool things on the internet, but immediately working on them in their own, usually limited, spaces. I know I was. I have notebooks full of cool ideas and projects I have yet to get to. One of the things I have enjoyed, and continue to enjoy about my time at Hacker Lab, is the community aspect of it, how just chatting people up about your interests, and projects you’re working on can lead to interesting and (potentially) profitable partnerships.

So get out there, talk to people, strike up some working relationships! No man is an island. And apparently, no hacker is either.